The Changing Portrayal of Adolescents in the Media Since 1950

The Changing Portrayal of Adolescents in the Media Since 1950

The Changing Portrayal of Adolescents in the Media

Adolescents are eager consumers of mass media entertainment and are particularly susceptible to various forms of media influence, such as modeling, desensitization, and contagion. These once controversial phenomena are now widely accepted along with the recognition that the media are a major socializer of youth. 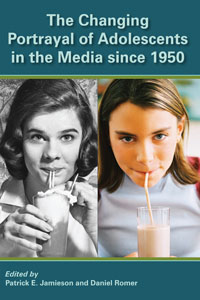 During the economic boom of the post-World War II era, marketers and advertisers identified adolescents as a major audience, which led to the emergence of a pervasive youth culture. Enormous changes ensued in the media’s portrayal of adolescents and the behaviors they emulate. These changes were spurred by increased availability and consumption of television, which joined radio, film, and magazines as major influence on youth. Later, the rapid growth of the video game industry and the internet contributed to the encompassing presence of the media. Today, opportunities for youthful expression about to the point where adolescents can easily create and disseminate content with little control by traditional media gatekeepers.

In The Changing Portrayals of Adolescents in the Media since 1950 , leading scholars analyze the emergence of youth culture in music and powerful trends in gender and ethnic-racial representation, sexuality, substance use, violence, and suicide portrayed in the media. This book illuminates the evolution of teen portrayal, the potential consequences of these changes, and the ways policy-makers and parents can respond.

Introduction:   Mass Media and the Socialization of Adolescents Since World War II

Chapter 1:       Understanding the “Jackpot Market”: Media, Marketing, and the Rise of the American Teenager

Chapter 2:       “Still Talking About My Generation!” The Representation of Youth in Popular Music

Chapter 5:       Adolescent Gender Role Portrayals in the Media: 1950 to the Present

Chapter 6:       Adolescent Body Image and Eating in the Media: Trends and Implications for Adolescent Health

Chapter 10:     The Changing Portrayal of Alcohol Use in Television Advertising

Chapter 12:     The Games, They Are a-Changin’: Technological Advancements in Video Games and Implications for Effects on Youth

Chapter 13:     Adolescents and the Internet